A Fantasy: The Dark Side of Healing From WhySupremacy

Recently, someone told me that Whypipo are trying to take steps in the right direction to become better people.  I was told that change is hard and we need to remain patient while they figure out how to right the wrongs of the past.  It came at a moment when the ongoing resistance efforts of the Wet’suwet’en in Canada are enlivening the righteousness of people all over the planet.

Quoting from this article in The Star, "Cricket Guest, an Anishinaabekwe Métis who demonstrated with Indigenous youth and climate change activists in Toronto on Tuesday, said disruption of traffic and business goods is “absolutely necessary” to bring attention to the injustices inflicted by the government and police on Wet’suwet’en in B.C.

Cricket Guest: “Reconciliation is dead.  And we will shut Canada down.  We’ve been resisting for 500 years and we’ll be resisting for 500 more if that’s what it takes to earn the respect and have a real nation-to-nation relationship.”

So, I thought about what would help my kind and thoughtful friend whose heart is in the right place, even if her actions lag far behind it.  And I came up with this.

Imagine this. It may help you think through the advice to take dismantling Why Supremacy with slow and easy baby steps. Because this is what polite, progressive liberalism feels like to me. 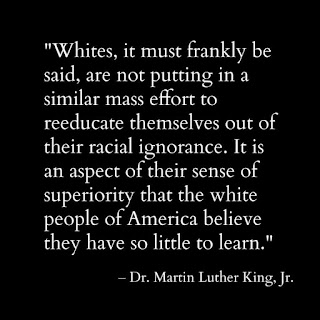 It’s a week long anti-racism workshop. The cost is free. However, the participants sign a contract which gives The Workshop all rights to any real property they might own, and the entire contents of any checking, savings or investment accounts, should they fail to complete the workshop. Upon entry, they would turn over any and all personal property. Prior to their arrival they would be advised to purchase travellers insurance and make flexible travel arrangements.

Each day of The Workshop represents a century. Each Whyper in attendance would be paired with another that they preferably do not know. That pair would be assisted in their training by Anti-Racism Trainers (a team consisting of a Black and an Indigenous person.) Their trainers would rotate in and out as they needed.

The workshop would proceed in this manner. For the first 4 days, the Anti-Racism trainers would pinch the Unlearners in the same spot every five minutes on the inside of their upper arm. This would begin at 7AM and go on into the night until bed time. If the UnLearner cried out, their partner would be given a very hard smack with a ruler on their thigh. At night, their sleep would be disrupted. They might be called away from their floor pallet to sleep at the foot of their Trainer’s bed. They might be called to deliver water to their Trainer. The pinching exercise would continue the next day.

Meal breaks would be given. The Anti-Racism Trainers would eat luxurious meals served to them by Allies who have already undergone the training. The UnLearners would be served what remained from the plates ...if anything…. and a dixie cup of water.

After four days, the Unlearners would be given the opportunity to say "Please, stop," in the most polite manner possible. If their tone changed or they omitted the word please, their partner (who is also being pinched ) gets thwacked with a ruler. The Anti-Racism Trainer would confer with their partner. They may or may not stop for a brief period of time. But, they would resume arbitrarily at their discretion. During such a break, the Unlearners might (or might not) be offered fresh food. An ice cube might (or might not) be offered for the bruise which has surely formed by now.

After four days, (400 years) the Anti-Racism Trainers would be allowed to start saying "sorry" after pinching the Whype. The pinching would continue, just if they felt like it, the trainers could say "sorry." 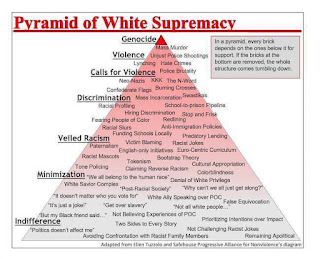 On the 5th, the people could pinch a little less hard. But, now, the Anti-Racism Trainers can berate them about how being here was their choice. The Trainers would also tell them that it is their fault. The Trainers would remind them how horrible their previous lives were and that they should be grateful for the chance to be a better person.

On the 6th day, after each pinch, the Trainers would ask the Unlearners what might make this situation better. Whatever the Unlearners said would be ignored.

On the 7th day, the Unleaners and The Trainers would come together for a big festival and feast. The Unlearners would be invited to sit at the table. The Trainers and other attendees would pepper them with questions about their experience. Anything the Unlearners said would be questioned, challenged and dismissed. During the late afternoon, they would be informed that Training must be continued because it had not been very well executed.

Everyone would return the the Pinch Without A Single Sorry routine.

On the 8th Day, the Unlearners would be informed that they were not going home.

On the 9th day, the Unlearners would be informed they were not going home. 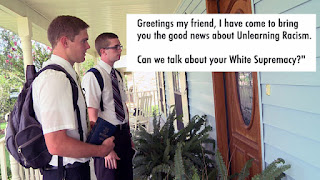 On the 10th day, the Unlearners would be free to go. They would be reminded that the contract they signed had an iron clad non-disclosure agreement. Their personal property would be returned. And they would be escorted from the premises with no arrangement for transportation or food.

This is how it feels.  This is how the last 40 years of my life have felt. And I'm actually waiting for so many people about whom I love and care to even take one step. It's time for Whype to stop talking.  Talking is all done.  Talk on your own time.  The doing must begin.

What dark places Racism takes all of us.  But, sometimes we have to stare into those dark places in order to allow them to birth light.
Email Post