I Am A Community Organizer #2 | PALS Enrichment Programs 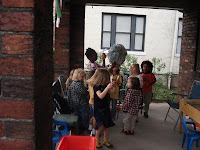 This is my second post on how rich community organizers make my life. If Sarah Palin hadn't made her unfortunate comment last week, I probably wouldn't have shared this with you. It's just a little something in which I participate that may or may not be of interest to other people. Until she made that comment, I just privately acknowledged how blessed I am to be part of PALS.

This is the first week of enrichment classes for our home schooling group, PALS Enrichment Programs. This dynamic, diverse group of mamas (and papas) have given so much to the secular home educating community. (Secular home educators are families that are home schooling in the effort to raise independent and creative thinkers. They are not home educating out of a desire to prevent their children from being exposed to ideas like evolution, diversity and sex education.)

Back when I was raising my firstborn, Imani, there were very few secular homeschoolers out there. It was hard to find playmates. Eventually, we sent her to school. However, many of the mamas who founded PALS discovered each other. They shared their skills and taught each other’s children in a living room. This small group grew until they finally had to incorporate as a 501C3 ten years ago. Now, because of such high enrollment, they must rent space and organize and schedule classes for pre-schoolers all the way through early teens.

PALS is a completely volunteer run organization. It is run by the parents for the children. It is open to anyone who wants to belong. And as trying as it can be sometimes, diversity is in action. (Which means we can and often do disagree...respectfully.)

The classes at PALS are taught by mothers (or Dads) who have some special talent or creative idea that they can share with the group. (Many of us have had dynamic careers in a variety of fields before we chose to stay home with our kids.) Parents pay for classes. The proceeds go toward facility rental, insurance and teacher pay. Any surplus is usually put towards giving families in need scholarships.

Through PALS, my son has had the opportunity to interact in a classroom setting with his peers. But, more importantly, these classes are taught in the way I want my son to learn. For example, last term my son took a dance/literacy class. The teacher incorporated yoga and modern dance to build early literacy skills. He has also been able to learn Mandarin Chinese from a native speaker. 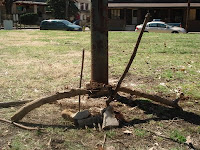 The classes are always affordable, innovative and taught in a way which stimulates the child’s imagination. I’ve seen children being spies and breaking codes. I’ve witnessed children building constructions out of “wood, metal and the occasional match.” I’ve seen a group of 7 to 10 year old interpret MacBeth and stage their own production of it. One afternoon, some of the younger children built this “bench” out of sticks and rocks.

In addition to the weekly classes, PALS offers a Curriculum Lending Library. This library provides access to many high-ticket items which make no sense for a family to buy. For $25 a year, I can check out things like microscopes, telescopes, anatomy models, test tubes, Bunsen burners, and cuisinairre rods. Many of these items have a prohibitive price tag which is unrealistic for the average family to afford.

Finally, a parent organizes opportunities for interested members of the group to attend the “school performances” of a variety of cultural programs. The ticket price for an opera or a ballet is sometimes well above $35.00 a person. Considering that the majority of us are choosing to live on one income, this affords our children the ability to be exposed to arts programs at a discount price.

Other than it exists and I can be part of it, what warmed my heart last week in regards to this organization is its ability to respond swiftly to the concerns of the community. Earlier in the week, a few parents raised the issue that many home schooling families couldn’t afford the membership fee for the Curriculum Lending Library. The community immediately rallied around these families by contributing solutions in the form of money and work exchange ideas. In a little under a week, the community raised a significant amount of money and created a committee to develop policy on how to make disperse scholarship money in the effort to make sure the library is inclusive.

More importantly, I meet parents who say, "I wish I could homeschool." I respond that they can choose not to "leave their child behind." And then I tell them about the programs available to them. It makes them stop, think, and plan. 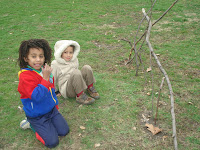 This is a picture of a "monument to justice" my son and his friend built in the park. Sarah Palin may think community organizers have no actual responsibilities, but, facilitating opportunities that result in a generation of creative and independent thinkers may just save our future from her kind. And that is probably what she fears most of all. People of her ilk would prefer an America filled with sheep masquerading as people.
Email Post
Labels: Black Homeschoolers community organizers Home Education homeschooling PALS Enrichment Programs Sarah Palin