Like, love, or hate Facebook, it is an alluring platform which isn’t likely to be going anywhere soon. It has no real shape or form ~ other than what the user molds out of the posts of their friends, family, associates and the occasional co-worker. Who you are and who you know, essentially, defines your experience with the platform. For people like me, who love information, it is a treasure trove.

The value of a curated news and information feed has never been more evident than in recent conversations with my father. Eric W. Springer, Esq. is an erudite attorney, amateur historian and artist who has given a lifetime of service to communities advancing progressive reform. Son of a labor activist, Maida Springer and mentored through life by a saint, Pauli Murray, he is a stunning conversationalist.

Information moves so quickly now. Gone are the days one could derive comprehensive information from a handful of sources. And as a result, my relationship with my father is shifting. I have a phrase I use often. “Every parent is a home educator, whether they accept full responsibility for that or not.” As my relationship shifts with my father, I’m beginning to know I came to that understanding because my parents after-schooled me. They never let me wholly consume the inaccurate presentations of history in school. They never allowed me to parrot the racist, sexist or even homophobic antics of my contemporaries and teachers. Even as I grew into myself as a mother, an artist and an activist, I turned to my father. He was my definitive sounding board for all socio-political thought, movements and even culture. That has changed.

The evolution of social justice is not actually loud on social media. It only seems crash and crude. Each susurrate social justice post, each quietly shared revelation from an erudite person joins together with others to make a din.

A few years ago, my Dad questioned Winston about something. (I don’t remember what it was because I didn’t blog it.) My son glibly responded, “Oh, Grandad, we’re doing just what you and Grandmother taught us, being independent, free-thinking people. We’ve moved past respectability Politics.” 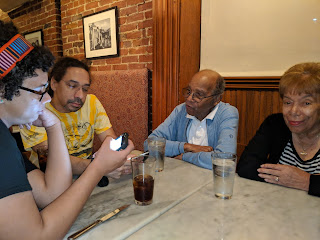 I’m glad my Dad’s neck is sturdy. It snapped so hard. His eyes got wide. He brought his hands together leaned forward and asked, “ R e s p e c t a b i l i t y Politics?” ( Damon Young The Definition, Danger and Disease of Respectability Politics, Explained covers it eloquently here. In fact, I probably printed this article for him to read after our family discussion. )

As my son explained to him what Respectability Politics are, his eyes got wider.

My father looked over to me. Dad: This is a thing?

Me: Yes, Dad. respectability Politics. It's like when I was little and you sent me to that private school.  And Mom told me, "I was an ambassador for the Black Race." Dad! I was like 6 years old. But it was really important that ...

Win: She should be worried about the White Gaze.

Dad: (incredulous) T h e  W h i t e Gaaaaaze? Where do you learn about this stuff?

Me: On the internet.

Dad: So, if typed The White Gaze in my Google, I would see an article about that.

Me: Many. Many, many, many articles.

Dad: But, where does it come from? What university? Who is publishing these papers?

Me: People. People like you and me Dad. Not just universities.  Newspapers, magazines...

Dad: Why aren't I seeing it? Where do you find it?

I knew in that moment, the conversation about Why Supremacy, Womanism, and Gay Rights has been occuring so rapidly, that he, as an avid participant and contributor to the social justice movement, had retired. It was kind of a sad moment to me.  He had missed the equivalent of years of social justice evolution. But, it hadn't been that long in real time.  It had really only been about six months since that phrase had moved into common parlance. Enough so, a child could utter those words with confidence and assurance.

The shifts of social media are sneaky susurrations which only become evident with time - much the way old age sneaks up and turns you from teacher to student.

End Note:
Facebook was a lazy journal. Many a poem or essay began there. It was also the place I hung my rough drafts out in the wind to dry. It’s easier for me to search and find those on this platform.

It was also a place I could store the things I read or find them more easily. Especially all of those amusements which capriciously manifested right when they were needed. I’ll be putting those here where I can find them more easily in the future. If you subscribe, look forward to The Daily Read.

I'll be compiling them anyway to keep my Dad up to date.