Bad News For Women Who Want Those Orgasm-Inducing Mushrooms

I saw an article about some Hawaiian mushrooms which make women orgasm. It was a misogynistic article celebrating nature and rape culture.  Seriously, I really imagine the author thought they were writing exclusively for a group of frat boys in a locker room and that nobody else was reading.  The article brought out the fact checker in me like a beast.  I do have to say, though, that they worked really hard.  Their two links clicked through led to actual scientific journals.  But, when I went to read the studies, guess what wasn't there?  You got it right, the studies.  Just goes to show, read everything critically.  Chase down the studies. Check the scientific process. Read the findings. Get a secondary source.  And better yet, just read the article before posting it.

So, why did I go chasing down the studies?  A few days ago, my child and I were sitting around having our usual cool morning check-in with each other.   He told me about a science study that he'd read which concluded women dream in color and men dream in black & white/less color.

He stated that he dreams in color. (Well, of course he does, he's totally engaged with protecting the fullness of his humanity.) So, I told him to ask his Dad. And lo! His Dad dreams in less color/black and white.  This made us wonder if children dream in color or in black and white/less color. And if their dreams changed color with the onset of puberty? And do trans people dream in themselves or their assigned gender? We did an informal poll in a group of friends and the results debunked whatever article he had read.

Regardless, I think our discussion yielded a more important takeaway than chasing down studies in click-bait.  It brings up the larger issue of scientific studies and inclusivity.  If these mushrooms caused women to orgasm, were the scientists transgender inclusive?  Shouldn't any scientific study which is determined to gender something include everyone?

The Trans Obituaries Project: Honoring the Trans Women of Color Lost in 2019

This is a whole pause and take a moment article.  Illustrated by Jacob Stead, these small glimpses of the vibrant people we've lost are moving.  If you are on a computer, it might be interesting to listen to this interview from Democracy Now about Transgender Day of Remembrance: “Celebrate the Living” While Honoring Loved Ones Lost to Hate.  If you don't know or love a person who moves beyond binary, it is easy to get fixated on the tragedy and death.  The best question to ask oneself - today, the day after the day of remembrance is what I doing to support life?

Goth So White? | Black representation in the Post-Punk Scene

In high school and college,  I was into punk and new wave.  Always the lone Black girl doing what I wanted when I wanted.  My brother and I had a funny laugh about it the other day.  He recalled wanted to go out with me one night I was off to see something like Gina Sue Cotton and The Banshees. And I told him, he was not going out dressed as he was and proceeded to tear his clothing apart and safety pin it back together and patch it back together. LOL!

One of the things I like most about the invention of the internet has been its ability to connect people who otherwise felt disconnected.  More importantly, for Black people, it makes it easier to document that #WeHaveAlwaysBeenEverywhere.  Afro-Punk has a great article about Black Punks.

Along came my husband and the goth scene.  (Even though he was a bit more industrial than Goth, Pittsburgh had a goth scene.  It's been about 17 years since I've been out to a Goth club.  My husband and I were one of the few Black folks in Pittsburgh who participated in the Goth scene. 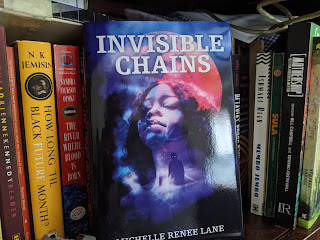 Back then, a lot of folks thought we were some White-acting Black people because of our active engagement with the whole wide world... a diverse selection of music, funky cool clothes (which we often made ourselves,) fantastical creatures, love of mythology and history, comic books, role playing games and technology.

The Pittsburgh goth scene was where we met our friend Michelle Renee Lane, author of  Invisible Chains.  Michelle is an exceptionally bright woman with a honed and sharp sense of humor.  She occupies her brown body with with a sense of peace and certainty about the importance of her individuality.  She was a relief and a validation to me.  So, when her book was published last year, I was and remain ecstatic.  I'm so incredibly proud of this work she created.  So, enjoy the above article about the young people.  And be thankful to all of us old heads who held space for you by buying Michelle's book.  As you can see from the picture, I have bought and read it myself.

From the website:
"Jacqueline is a young Creole slave in antebellum New Orleans. An unusual stranger who has haunted her dreams since childhood comes to stay as a guest in her master’s house. Soon after his arrival, members of the household die mysteriously, and Jacqueline is suspected of murder. Despite her fear of the stranger, Jacqueline befriends him and he helps her escape. While running from the slave catchers, they meet conjurers, a loup-garou, and a traveling circus of supernatural freaks. She relies on ancestral magic to guide her and finds strength to conquer her fears on her journey."

An Artist Who Makes Paintings Without a Canvas

This week has been rich feast!  Delicious and magnificent.  Really enjoy this article about Suzanne Jackson.   I wish I had the privilege of meeting her at Cave Canem.  What inspired me?  The fact that she has pushed the medium of acrylic paint to achieve such luminous, evocative abstracts.  Her work feels unfettered to me with an artistic freedom only faith and ingenuity can deliver. It's a great interview.  Well worth your time.

This news, after the announcement of Betye Saar's first exhibit at MOMA, gives me hope that this will be a year in which those elders who have diligently stayed true to their muse and artistic mission will be honored and recognized.   New Orleans author, essayist, poet and activist Kalamu ya Salaam will be a recipient of PEN Oakland‘s Josephine Miles Awards. It's about time. If you are the kind of person who digs deep into Black poetry, you know his work and you know it well.  Because I love history, I have come to notice a few things.  In every arts scene, to truly understand its stars, you must also know the voices that surround them and inform who they are.  Art, politics and its personalities often decide who spends time shining and who labors in love regardless of accolade.

Writing For A Global Audience, An Interview With Ishmael Reed

Ishmael Reed is prolific! It's hard to keep up with all his writings.  But, when you do catch up, it's worth it.  He is the author of one of my heart books (a book I return to again and again.)  I don't know about you, but, reading interviews with excellent artists always emboldens me.  This section of the article spoke to me.  "When I was living in New York, I was a token-in-waiting, but when they chose to anoint me, I said that there were Black writers who were as good as me. I left New York for the West. I wish all tokens would make that announcement. bell hooks said that white feminists told her that in order to succeed, she had to write for them. As a result of tokenism, generations of Black writers who write as well or better have been obscured. It’s all political."

Colorism is a Thiiiing!  Especially in the Afra-Latina community where light is bright. The perfect body must make clear that Africa has been subdued and colonized.  The perfect body must only gaze through through the mist at ghosts from Taino genocide.  What then of those of us who do not conform?  Well, read the story of Sacha Antonetty-Lebrón.  This is what we do.  Keep pushing forward and demanding our right to thrive.

How did I know to pay attention to glyphosate?  Cookies.  Anyone who followed me on Facebook knows that I've been in love with a cookie company for about two years. Partake Foods is a Black and woman owned company who deliver tasty cookies that are gluten free, vegan, kosher and free of the top eight allergens.

They started the company when they discovered that their daughter had severe food allergies.  With a whole lot of love and determination, the decided to develop a suitable substitute so that she could participate in all of her childhood activities without standing out.

A few days ago, they announced that their cookies are officially certified glyphosate free.  Amazing. They are so ahead of the game.  Learn even more about the effect of this chemical in an interview on their blog with Dr. Bojana Jankovic Weatherly, an award-winning physician who is double board certified in internal and integrative medicine.

Why Is Glyphosate Sprayed on Crops Right Before Harvest?

Why do I care?  Well, this article does a great job summarizing this study published in Environmental Sciences Europe by Charles M. Benbrook, a former research professor at the Center for Sustaining Agriculture and Natural Resources at Washington State University.  (Okay. Real science established.)  Last year, it would seem, that both the World Health Organization and the state of California classified it as a probable carcinogen.  There is also a growing body of research which shows that it is an "endocrine disruptor and that it kills beneficial gut bacteria, damages the DNA in human embryonic, placental and umbilical cord cells and is linked to birth defects and reproductive problems in laboratory animals."

To Make This Tofu, Start by Burning Toxic Plastic

Our belief that other countries should pay the price for our failure to adapt causes environmental mayhem.  In this case, the plastic terrorism is happening in Indonesia.  The tofu they make is probably not sold to us.  But, it is a staple for people in many Asian countries.

The Sun Will Set In Barrow, Alaska This Afternoon And Won't Rise Again Until 2020

Be grateful for your light.  It's a cloudy day today in Pittsburgh.  I never much minded cloudy days. In fact, I missed them fiercely when I lived in California.  I used to refer to the weather as relentless sunshine.  In the winter, though, I dislike the early sunset.  What many people in the Northern Hemisphere experience in the winter is unimaginable to me.  So, when the sun sets around 5PM tonight, I will think of these folks.  I will remember to be grateful for the end of my cloudy day.

It's Doctor Who news.  You have to share it.