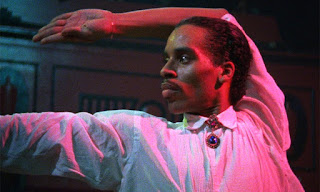 I can not believe that Paris Is Burning is turning 30 years old. I saw it in a movie theater at a film festival.  It was the first thing I turned to when the series Pose began.  I turned to my son and said something like, "this has already been done." Which it hadn't.  Sometimes, this strange urge comes over a parent to exclaim loudly and for no good reason, Hey, I was cool once.  I'm really lucky my son actually thinks I was pretty cool once and could be awarded that status every now and again.  But, it is one of those things older people have to say every now and then.  So, I did.  Regardless,  it will be interesting to watch it again with the new footage.  But, part of me will notice that nothing much has changed for Black gender non-conforming queers.

Sometimes, the best part of an article are the click throughs.  The first click takes you to the event page  from there are links to individual designer's web pages.  It is nice to see a full blown spectacle documenting Indigenous designers after years of European designers ripping off everything from textile patterns handed down from mother to daughter through the generations to traditional jewelry. It happened in 2015 when a Nunavut family became outraged after a fashion label copied their sacred design.  And again when a Mexican family sued Marant’s Etoile for a blouse in their collection.  It's gotten so bad out here for Indigenous people that the The Maasai want their brand back.

In addition, they are not shying away from politics or the ugly realities of their community.  The whole event kicked off with The Red Dress Event which was "in honour of Murdered and Missing Indigenous Women, girls LGBQ, and Two Spirit community." Do you ever think you'd see such a thing on a Paris runway?  I think not.

While we're talking about fashion, Shea Moisture Founder Buys Essence Magazine, Returns to 100 Percent Black Ownership. Let's see what that does (if anything.) All skinfolk aren't kinfolk. It would be nice to see them go in the same hard hitting political direction Elaine Welteroth to Teen Vogue. 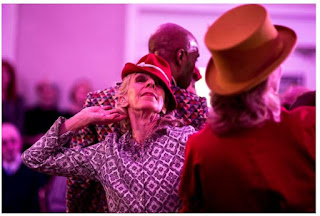 Wonderful.  Leave it to the country which had a baby disco to create the Posh Club.  When we lived in London, a pub in Stoke Newington used to have a monthly "Baby Disco."  They opened the door around 5PM,  hired a dj, and the toddlers hit the dance floor.  It was fantastic.  What I always found amusing is you could tell which scene the child's parents had been in before Lil One came along and ended their club days.  We had little rave kids, hip hop kids, goths and punks all dressed much like their parents would have been dressed when they went out.   When we returned to Pittsburgh, we tried to start the same thing, Club Family.  But, alas, this is Pittsburgh. (See below.)  Regardless, I am so excited to learn of Posh Club.  Now, I have to consider how to get back to England for my late-in-life.  (Also, see below.) Because yes, after all the kids are out there living their very best life, I intend to be dancing.

My City Was Named The ‘Worst Place For Black Women To Live.’ Is That My Cue To Leave?

Wherein one thinks one is going to get an answer and finds themselves thinking they should have taken the time to write this piece. But, this author did such a fabulous job, now one can use their time for other things.

Florida really needs to stop being a joke. The whole country was watching when they passed Amendment 4 which allowed felons to vote.  As we all know, a disproportionate amount of Black folks are incarcerated.  So, having been convicted of a felony, in essence, disenfranchises Black people.  Modern Republicans really don't want Black people to vote.  So they passed a different law to disenfranchise Black people.

If you are following along, yesterday, we read about Wisconsin's prison gerrymandering. This is a  system where they can benefit from federal funds specifically targeted to assist areas with a high density of Black people.  But, those funds don't benefit Black people because all of the Black people in that district are incarcerated.  Seems like a 20th century 3/5ths Compromise, doesn't it?

Well, Florida create rocket dockets to get rid of the fines through the court system.  This way, former get a certification stating clearly that they have no financial obligations and are eligible to vote.  It's a fascinating article.

Millennials Hate Phone Calls, And The Have A Point

Or do they? It was Forbes.  I thought it would be worth the read.  I thought I would understand. I don't. Then again, I was always in agreement with Miss Manners that "the telephone is an inherently rude instrument."  Yet, I prefer it to text. I think perhaps if millenials had paid more attention to Miss Manners and her philosophy about the assumption of other people's availability, this article might never have been written.