This is my journal.  Thanks for peeking in it.  The daily internet goes by so quickly, I like to remember what I saw and thought. You might find it interesting also.


Waking up this morning, I literally squealed when I encountered this link.  There are so many levels on which this art piece works.  Here's the basic low down.  King Frances and Henry VIII were on a mission to portray themselves as fantastic renaissance kings ~ men of peace and culture. So, they arranged a meeting outside of Calais.  At that time, Calais was still an English territory. (Yes, this is an ongoing theme in English history.  Go find someplace far across the water.  Claim it. Defend it as yours.) Frances and Henry agreed to meet outside of Calais.  Neither monarch spared any expense trying to out bling each other.  They had tournaments, music, cavorting, and a fountain of wine. Towards the end, Henry VIII agreed to wrestle Francis. Henry lost.  As they exited the text, they looked up in the sky and saw a dragon flying over.  (There were eyewitness accounts published in Paris.)  Regardless, they took it as a emblem of Henry's superiority.   The whole thing ended up going down in the history books as The Field Of The Cloth Of Gold. 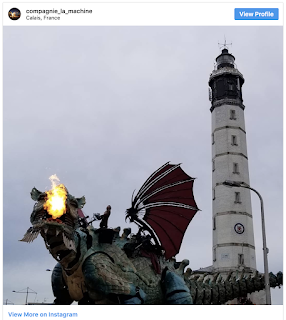 For artists to make this project in this place, at this juncture in time, given Brexit, English politics and the current state of the E.U. is ... well ... rich and delicious.

I also have to say, I was delighted because I have a special place in my heart for The Field Of the Cloth Of Gold. The last project I did as an Outreach Artist for Historic Royal Palaces at Hampton Court Palace was a project about Henry VIII and The Field Of The Cloth Of Gold for the new build at the Clore Learning Centre. The poem the schoolchildren and I wrote together, which was then mounted on a banner, was called he Drap D'Or Dragon.
When Winston joined me.  I shared this story with him.  It became one of those sweet serendipitous internet unschooling moments I cherish so much.  No, we had not intended to discuss Tudor history.  Nor do I think he would seek out Tudor History as a personal intellectual pursuit.  But, as one of my favorite master teachers, Kit Crawford said, "Learning begins where the learner is." And, as usual, she is right, because he immediately called to mind a myth about a French dragon he learned about from the ever reliable, Overly Sarcastic Productions.  He promptly pops up this video Miscellaneous Myths: The Tarasque.  History would have been completely different if this beast had shown up on June 24th, 1520.

Behind The Racist Coup In Bolivia


It is so important to take in media critically.  I don't want to really get into the current state of American politics, but, I can say definitively, it is always best to read a wide variety of source material before forming your own.

What is happening in Latin America has always affected the United States.  My awareness began in the 1980's protesting against interventions in El Salvador.  You can get a quick summary from Associated Press in this article Before Venezuela, US had long involvement in Latin America

Oh, right.  We really love and need our lithium. Batteries, that is.  Lithium, a Strategic Resource: Here’s Why The US Wants To Break Bolivia To Bits With Hybrid War It's a thought.


The Thanksgiving Tale We Tell Is a Harmful Lie. As a Native American, I’ve Found a Better Way to Celebrate the Holiday

Sean Sherman tells his personal story of his family's relationship with Thanksgiving.  At this time of year, I am always conflicted about the violent erasure of Indigenous history.  On the other hand, it is a guaranteed time off (excepting exploited retail workers) where families can come together.  As the oldest daughter of parents who are aging, I have become the keeper of the holidays.  And respectfully, they haven't co-signed our vision of slacking in your pj's all day as a protest method.  And we can't flee the country like we used to do, because they've gotten a bit too frail to travel.

Anyway, I digress. I really enjoyed this read. I'm also interested in cooking, gardening and living closer to the land. (A woman can dream, right?) So, I went and checked out The Sioux Chef's Indigenous Kitchen which won the 2018 James Beard Award for best American cookbook. I'm adding that to my Wishlist.

If you're looking for more ideas about the holiday. Try 8 Ways To Decolonize Thanksgiving & Honor Native Peoples On Thanksgiving. I'm sure these pieces will become more frequent in the next few weeks. So, the link is here just in time to plan ahead just a wee bit. 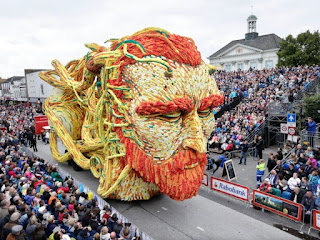 Is there anything more to say really?  It's eye candy. Please comment is I am missing some delicious poignant historical connection.

Pissi Myles, a citizen of the United States Of America exercised her rights to be informed about the machinations of her government.  She is a drag queen. Good on her for participating in democracy.  Apparently, this is news. 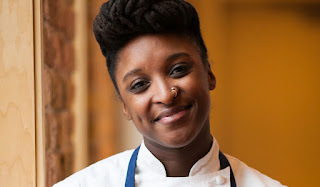 The above article?  Fabulous.  I think you will really enjoy learning about Mariya Russell, the first Black woman to receive this honor. The above link is an excellent example of how incredible multiple sources can be.

But, If you want an excellent demonstration of how unconsciously racism attempts to sneak up on you, read the following article which links to to a restaurant podcast.  But, here, let me highlight the subtle, creepy racism, and give you the whole post without you having to click through. "In less than a year, her food has spoken so eloquently and commanding that it’s garnered the restaurants, owned by renowned chef Noah Sandoval and beverage director Julia Momose, all sorts of accolades. From a highly regarded Japanese milk bread toast topped with fermented honey ice cream and truffle to the seven-course omakase experience, her cuisine has mesmerized the likes of Bon Appetit (“Top 50 of 2019”), Food & Wine (“Best New Restaurants”) and even Time (“100 Greatest Places of 2019”). In October, she received the most significant honor of them all: a Michelin star. In doing so, she became the first-ever black woman to achieve such a milestone." -  Chicago Chef Makes History as First Black Woman Awarded Michelin Star

More eye candy.  This particular eye candy comes in the form of Anti-Blackness is real.  But, have no fear, there are really cool people out there making sure our contributions to culture and history are documented.  1ncognito_ or Igbo Excellence went out of his way to make a Twitter thread because African Architecture is stunning.

The Met Will Stage Its First Opera by a Black Composer

How exciting! It is so easy to get lost in your daily dose of Black hopelessness.  There is so much more to what is happening with us than murder, mayhem and making each other victims of our own slave mentalities. I love the title.  What poet wouldn't love a title like, Fire Shut Up In My Bones? It is based on a memoir of the same name by Charles Blow, an Opinion columnist for The New York Times.  Didn't read it?  Me either.  So, I went and looked.  Here is Jelani Cobb's review The Child’s Village Leaves Lifetime Scars.

This is a glorious time suck.  Because, naturally, you're going to click through to the archive.  Because, everyone loves archives right?  And isn't the modern world glorious because you don't have to put on clothes, leave your house, drive somewhere, go inside, ask ever so nicely, and put on the white gloves? You can just sit in your pajamas reading spells about how to take with Spirits.

What my friends are doing.

My friends are really important to me. I celebrate every success their life brings to them. I'm hoping you'll find them as fascinating as I do. I put these links in this category for the purposes of full disclosure.

My voodoo priestess friend Lilith Dorsey was talking about What To Do About Psychic Vampires & Energy Terrorists.

My mindful Antioch College buddy, Steven Thurston Oliver, was on the YouTube talking about Contemplative Pedagogy & the Journey of Becoming | TEDxSalemStateUniversity. I find his perspective as a Black gay man gives mindfulness an added depth.

Pop Culture Cookbooks Are One Thing Millennials Aren't Killing. Forking Good is the an unofficial companion cookbook to The Good Place that my friend My friends Stephen H. Segal and Valya Dudycz Lupescu wrote. On a personal note, I'm having a ball with Forking Good. But, I have to say their first book together has a special place in my heart. After all, you may or may not cook special new recipes everyday, but, if you are a geek parent, you are one every single day. And I do, from time to time go back and flip through Geek Parenting: What Joffrey, Jor-El, Maleficent, and the McFlys Teach Us about Raising a Family

If you made it this far, thanks for reading with me.  Post a comment here.  If you're my friend on Facebook, you can comment here or there. The best part about reading all this stuff is talking about it. I'm going to try to put my Daily Read up by around 6PM.  Anything I read in the evening horus will be posted tomorrow.
Email Post
Labels: African Architecture Black composers Bolivia Cookbooks Drag Queen Dragon Drap D'Or Henry VIII Home Education Impeachment Indigenous Cooking Mindfulness Plague Sculpture Thanksgiving Voodoo

Lilith said…
Thanks for the link. This time of year is so precious and that piece was my small way of reminding people they are in charge of their own boundaries. This is true not only in the month of “No”vember, where we’ve been challenged to say no to things that don’t expand our joy, but all year round. Much love to you and yours 💜
8:21 PM

Christina Springer said…
Love to you Lilith! It is that season! And I'm glad you delivered some good information on having some boundaries.
9:12 PM