Pittsburgh-based James Hough was selected to be the first artist-in-residence in the Philadelphia’s DA’s office. I'm really excited for him.  I don't know him, but, what I have seen of his artwork (left) it is powerful.  The Prison Industrial Complex took 27 years of Hough's life.  During his time inside, Hough focused on his artistic practice, becoming involved with Mural Arts Program and its Restorative Justice program for inmates. Whatever his opinion on incarceration are, I'm just happy for the brother.

Philly's DA, Larry Krasner must have run a very interesting campaign .  He "believes criminal justice reform is having a “cultural moment.” The article explains all of that to you because my head spun around when I read it the first time.
Regardless, it was progressive platform.  And apparently, he believes that  "criminal justice reform is an important civil rights struggle of our time, and it is finding cultural expression."  I only wish Hough was working for the other side.

Rion Amilcar Scott Is an MC’s MC: An Interview by Reginald Dwayne Betts

What can I say?  It's a fascinating read.  Both authors are extraordinary.  I'm more familiar with Betts.
So, the most I can say, if you really want to enliven your day, check out this article.


Samaria Rice, ACLU create booklet in Tamir’s memory to teach kids what to do when they encounter cops

For me, there will never enough justice for Tamir Rice.  And I know for Ms. Samaria that feeling is magnified and intensified one million fold.  If this is how she wears grief, let me study her.  She teamed up with the American Civil Liberties Union to release a booklet that guides children through the stress of police interactions. The eight-page guide is available for download on the ACLU’s website.

Giving this a head nod in the #WaterIsWet category, say it again louder for the people in the back.  Fortunately for us, we have grown to a point where the trauma has processed enough for me to joke sometimes with my parents and I say, "Remember that time to sent me out among the White girls to learn their evil ways?"  And we laugh and realize that in spite of everything, who we were as a family may have made some changes in the world.  It's all how you sift through the memories, order, reorder, understand and heal.

and it goes on.  It makes me look around and ask, "What is your legacy? How are we grooming our children to create connections and empower them to walk through the world with a unified voice? (Or enough of a unified voice they can collect and be comfortable?)

It is long overdue, but, Latin America is finally beginning to explore Anti-Blackness.  As we saw yesterday with the new magazine, Revista Étnica  by Sacha Antonetty-Lebrón Puerto Rico addressing the issue of colorism. Here we see artists exploring the fact that #WeHaveAlwaysBeenEverywhere.

The exhibit is a mix of historical, archived and contemporary photos of the Afro-Mexican communities that were not only enslaved by the Spanish, but those people who self-liberated from the U.S. My next question is when will someone address all those Olmec heads?

Farming While Black: Growing Food and Community While Saving the Earth

I already had high hopes.  But, this interview begins the perfect way.  "Author, Leah Penniman quotes Toni Morrison as inspiration: If there’s a book you really want to read, but it hasn’t been written yet, then you must write it."

Not many people know this about me, but, my biggest fantasy in life was to live in the country in a little dome house that I owned, grow my own food and make art.  I've had pieces of my fantasy over the years.  And I'm grateful. This is one of those "White-acting" things of which I have been accused. Which she mentions in the interview.  LOL!  Again, the age of the internet is beautiful thing. It connects people.

But, like this story, my discovery of Soul Fire Farm was organic.  I met poet and educator, Mistinguette Smith, at Cave Canem.  As we stayed in touch, I learned about a project she began, The Black Land Project.   "Black/Land gathers and analyzes stories about the relationship between Black people, land and place." When I began to discuss the importance of Black self sufficiency, Mistinguette pointed me in the direction of Soul Fire Farm.  There is nothing I love better than people living out my fantasy.  It lets me know, 1) that it is possible, 2) I am not alone and 3) there might still be time.

Soul Fire Farm isn't just a farm.  Yes Magazine wrote a great article about their BIPOC Farm Immersion Program .  They have a youth program, offer workshop, community farm days and run a farm on 72 acres which feeds the people in Albany and Troy County.  What an inspiration!  Anyway, Leah Penniman wrote a book. This article let's you hear her voice.

Here is an independent seller for buying Farming While Black:Soul Fire Farm’s Practical Guide to Liberation on the Land

Tracing water, memory and change through Black experiences along and near Route 65

This is a lovely photo essay by Njaimeh Njie.  She begins the essay talking about her work which, "focuses on how history shapes the contemporary experiences of Black people in the industrial Midwest, and I’ve been thinking about water as a gateway to explore the deeper forces that shape the lives (and livelihoods) of Black people in this region. Black residents have traditionally lived close to the waterways — sometimes by choice, but often because of racist housing and land-use policies. Over the years, the proximity to water allowed access to transit, jobs, bathing, washing, fishing and leisure, but it also placed these communities at a disproportionate risk for flooding, pollution, disease and other issues caused by water."  The essay goes on to offer portraits of people and the landscape.  Definitely some eye candy and food for thought.

Good news.  It won't necessarily bring much justice. It might not even repair all of the damage done to the residents of Flint, Michigan.  What excites me about this news is that a precedent is being set that the people we elect and the people they assign to carry out the necessary policies and programs for basic human rights can be held accountable for their actions - one way or another.  The ballot box is not our only answer.  (Never has been, but, that's a different story.  The courts have never been our answer either. But, I digress.) 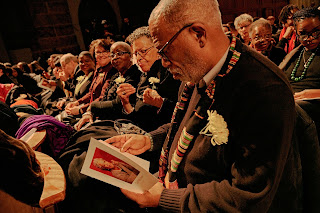 ‘She Saved Us’: Mourners Pay Tribute to Toni Morrison

The Nobel laureate, who died in August, was honored at the Cathedral Church of St. John the Divine in New York. Speakers included Oprah Winfrey, Angela Davis and Fran Lebowitz.

This is really exciting.  A few posts back, I discussed The Sioux Chef and his personal story about the Harvest Time Celebration (Thanksgiving.)  It seems we only think about Indigenous people, culture and food this time of year.  So, for a whole tv series to launch focusing on three chefs is exciting.

This link takes you to a few short videos about the chefs, some of the topics, and even one on what the elders think.   The series introduces (me) to Navajo/Diné Chef Brian Yazzie, Hawaiian Chef Kalā Domingo, and Pawnee–Athabaskian Chef Hillel Echo-Hawk.  Echo-Hawk is part of the Icollective "an autonomous group of Indigenous chefs, activists, herbalists, seed, and knowledge keepers."

This is so beautiful.  Not only are the youth moving.  I'm beginning to see more elders stepping up to offer guidance and support.  Eight women were chosen due to their lifelong commitments to their cultures and communities by The Spirit Aligned Leadership Program.  They come from from across North America.  Started in 2017, they will become the second circle of legacy leaders who will strengthen their sisterhood, share their life teachings, and plan pathways forward. The women are Haida, Cheyenne, Cherokee, Ojibwe, Ute and beyond.

In contrast...no.  Not award worthy at all. We don't solve the problems of breaking the Earth by using technology to replicate nature.  This is almost first in line to win the award for all the idiotic ways to harness one's intelligence.  It's very telling, though... how White people think about the future.  A majority of people are not in their future.  Technology can replace all of the Undesirables. Doesn't that award really belong to someone who is saving the bees?  The article is worth reading to simply unpack the level at which corporations are operating to influence and determine an agenda set by the world's most elite.

Abby Stein grew up in a very closed Hasidic community in Brooklyn. Her membership in the tenth-Baal Shem Tov, (founders of the Hasidic movement) goes back ten generations. In 2015, Stein came out as a woman, and she now works as a trans activist. In spite of speaking only Hebrew and having controlled and limited internet access, she managed to find information on being transgender. She wrote a book about her experience, Becoming Eve: My Journey from Ultra-Orthodox Rabbi to Transgender Woman 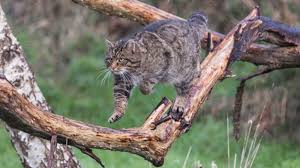 Other stuff I read:

‘Dark Shadows’ Gets New Blood With Sequel Series In the Works At the CW From Writer Mark B. Perry

Techniques to make bread fast in a cast iron skillet.  (Ignore all the blatant ads.)

We all new Mother Theresa was no saint.  But, wait!  There's more!