My family's Bajan identity was incredibly strong.  Our connection to the land was important to us.
That made a huge impact on me, especially witnessing my cousins as I grew up.  We would go "home."  There is nothing like being in a well run Black-majority country.  There is a palpable energy.  As a child, I loved Barbados.  I remember sitting in the tamarind tree with my cousin. (Yuck!) My other cousin could scale a coconut tree.  I was so impressed.  They had a different relationship to the land than we did.  Those visits informed how I constructed my identity.

I remember my mother once saying that her mother came because she had not inherited land.  The story has changed over time.  Regardless, my grandmother, after emigrating the the U.S. went on to become a realtor.  When I was a young adult, my grandmother once asked how I was doing.
I said something like, "I have a cute house..."

She stopped me right there.  "You own this house?"

"When you tell me you own your property, I'll know you are fine." She said. Then she turned around and went to make us a cup of tea.

Thread to the Word: Alison Saar by Hadley Roach

Alison Saar (right hand side above) This artwork speaks to me in such a deep and personal way.  The above article got me so excited.  And this art connect me to that article.  My father used to once describe Black and Indigenous people as "People Of The Earth."  He meant that culturally, we had a different relationship to the Earth than Europeans.  Our connection to the land was enough of a distinction, to him, to distinguish us from other groups.

This interview with the daughter of Betye Saar is tremendously insightful. I love reading about her thought process.  I love hearing about her life.

(LEARN & GROW!!! Learn about her mother, who at 93 is receiving her first ever exhibition at Betye Saar at MoMA: Prelude to a Revolutionary Breakthrough) Bet those articles last week about Baltimore only buying women artists and the first Black curator make more sense now.
MOMA.

Not trying to be decisive, just honest.  But, kind of like America has no problem with immigrants from Europe, so to does Disney care about Indigenous people in Europe.  It's a good thing, though. The Sami should be recognized and compensated.  I became interested in them when they showed up at Standing Rock to stand in solidarity with the Water Protectors.  They made real change happen in Norway by getting the Norwegian government to divest their pension fund.

Newly-Discovered Tiny Seahorse is Size of a Grain of Rice

So cute.  Nature is wonderful.

8 black composers who changed the course of classical music history

Of course I clicked this link.  Le Chevalier de Saint Georges has been a favorite since this really old blog post. I came back to blogging again partially because my son stumbled on an old post and was incredibly moved by it.  I think the most important this about this article is that it may introduce you some important music.  But, also to the understanding that #WeHaveAlwaysBeenEverywhere.

How Carob Traumatized a Generation

Ha! This is good fun.

Aph Ko on Speciesism as an Extension of White Supremacy

“[V]eganism isn’t just about kicking a meat-eating habit and getting some veggies into your diet. It’s a powerful rejection of a racist food system and a racist, cannibalistic politics that characterizes animals and nonwhite people as disposable and consumable. This is why anti-racist theory matters in our efforts to free animals. The goal isn’t just to get people to replace chicken with tofu (although that’s a great start). The goal is to get the public to understand why animals matter on a political and ethical level. The goal is to reveal how the current power structure relies upon anti-Black and anti-animal ideologies to strengthen itself.” -excerpt from Racism as Zoological Witchcraft: A Guide to Getting Out, by Aph Ko 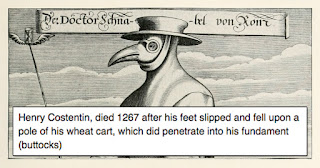 This is just way too much fun.  And what was with all the baby killing sows?  And why are their prices so widely divergent.  And who knew that someone's fundament is their ass?