We Tracked Down A Fake-News Creator In The Suburbs. Here's What We Learned

Fasconating! Wow. It's just business. Writing deliberate lies and passing them off as journalism is what this guy does. He doesn't feel particularly bad about it.  He justifies it by saying readers really should be better critical thinkers.

The most interesting part of this article is that he says he tried writing fake news for a liberal audience, but it failed because... guess what ... they're critical thinkers.  It makes me think that conservative aren't really conservative, it's that they struggle with complexity.  They don't want their minds to work.  They just want life to go on as it has always done before, everything and everyone neatly categorized and in a box.

The Midwestern Black Professor Teaching MAGA Babies Is Not Alright

I remember when the first Reagan babies entered higher education.  I can only imagine what it is like now.   Now, I don't have to imagine.  It's rough out there.  Compelling story.

About her demands:
1. Formal letter of apology for the lack of action taken.
2. A detailed protocol for how to respond to hate crimes.
3. Training for staff and students.
4. Finalized action plan to show that new adequate camera systems with a storage life of 30 days or more will be purchased and installed.
5. Principal and Vice Principal attend all future meetings she has with the superintendent to understand how they can support her.
6. Her Black History Month proposal should be approved.

Our racism killed Tamir Rice. Now it’s time to do right by his legacy.

Links at the bottom of this passionate ask.  I still remember the day I heard about Tamir Rice. He and my son are very close in age.  I think his case was when I realized that Why Supremacy would never be dismantled using the justice system.  It was a sad day for me, the child of two generations of attorneys who believed in the rule of law and the ability to litigate America into living up to its written promises.  If you have any spare change for change, this seems worthy.

This is so wonderful.  I want to connect this to the links above, and especially Tamir Rice.  A few years back I read a fabulous book, Our Black Year: One Family's Quest to Buy Black in America's Racially Divided Economy.  It was an insightful look at how tremendously difficult it is to achieve that goal.  Different sources have suggested that a dollar circulates in Asian communities for a month, in Jewish communities approximately 20 days and white communities 17 days. But, a dollar circulates in the black community about 6 hours. According to a report by the National Urban League, "that if the middle-class black consumers were to spend a little more — 7 percent more, just 10 percent of their spending — with black firms and the mainstream firms that engage them, we can create almost 1 million jobs.”

What excellent news! I really enjoyed this book which was inspired by The Negro Travelers Green Book.  This travel guide, made travel in the Jim Crow years a little easier for us.  Racism made it hard to find hotels, restaurants, and service stations willing to serve us.  In 1936, Victor Hugo Green published the first annual volume of The Negro Motorist Green Book which listed names, addresses, and phone numbers Black people could stay.  You could say, Mr. Green made it easier for us to buy Black, then again, by necessity, we had to own our own businesses during segregation. I admit, I felt some kind of way when I found out the book emerged from the White Imagination.  But, I can tell the author is either a very good researcher, has extraordinary amounts of empathy or many Black friends.  Regardless, it's in the expert hand of Jordan Peele now.  I'm ready.

And that my friend, says it all.

This is a fabulous commercial highlighting the impact of palm oil.  It's wonderful.  I hope you share it on every platform everywhere. 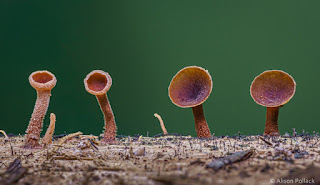 Mushrooms are amazing.  But, artist Alison Pollack  takes it to a whole new level.  Here is some stunning eye candy mixed together with some substance.

I'm always interested in the artistic process. So, hearing about how she stacks over 300 images to piece these images together. 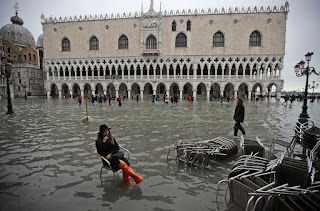 Such a huge amount of eye candy.  It's been a really long time since I've been to Venice.

Nobody is really adding any puzzle piece together.  Such as, could this be due to climate change?  The BBC gives more details than link above.

This really is the world we live in, huh?  A world where people really just want the beautiful images.

Who knew about Instagram's Plant Kween?

Okay, this was an embedded video in Facebook.  But, he was so wonderful to watch, I tracked the video down to the Good Morning America site on which it originated.

Can White people ever just BE in nature?

Denmark.  Why? You remind me of those hideous hotel pods bolted to the cliffs of Pero overlooking Machu Picchu.  Yeah - I meant that - look.

Simon Beck's snow art. Mathematics are beautiful.  This is cool though.  All he uses are some snowshoes and a compass.

The Strange Case Of Dr. Couney

Just your average strange piece of history store about a guy who saved a lot of premature babies. It's a fascinating read, especially since not much has changed in medicine. (Regarding the attitudes of doctors and decisions about who does and does not deserve care.)  In this instance, however, the use of the circus sideshow innovated modern medicine as we know it.